I’ve been very remiss in not writing sooner. The last month has been an absolute whirlwind and I should have posted a few times along the way. Consider my blog active now as I plan to update it at least a few times a week.

My self-addressed envelope with a Washington, D.C. postmark showed up in Arcata on August 3, only 113 days after I submitted the first paperwork in San Francisco. That’s less than four months when they warn it can take between six and eight, though it didn’t exactly feel that quick.

I booked my flight the next morning. Since one-way fares are inexplicably the same price as roundtrips with most major airlines I have a return flight scheduled for June 29, 2011. I’ll probably visit California for two weeks before returning to Sweden in mid-July.

The next two weeks were filled with difficult goodbyes and sorting through box after box of everything I accumulated in five years in Sacramento. I threw most of it away, repacked some to store in Arcata, filled two suitcases with clothes and shipped the rest of my personal effects from Oakland. Those boxes should arrive by the end of next month.

As challenging as it was sorting through everything I own, trying to see everyone one more time was harder. You leave hoping you can pick up right where you left off with everyone when you visit the United States or eventually move back, but you have to be realistic. Some people will change, and not always for the better. Others won’t make any effort to stay in touch. It’s a sad thing to accept.

I woke up in Anaheim early on my last morning as an American resident and took a quick walk past the Disneyland entrance. Seeing all the young kids lining up at the main gate with their excited smiles, I remembered how thrilled I was to meet Mickey Mouse the first time. I guess my definition of excitement has intensified a little over the years.

It’s only happened a handful of times in my life, but I couldn’t put my emotions into words on the way to LAX that evening. The gravity of this whole thing didn’t sink in when my passport arrived, when I bought my flight, when I packed my bags or when I said goodbye to friends. It finally hit me during dinner with my family, overlooking one of the runways at the airport. The fear, shock and sadness I felt as I boarded a plane in Los Angeles finally gave way to excitement when I landed in Gothenburg and saw Amanda waiting for me. Who needs Team Edward or Team Jacob? 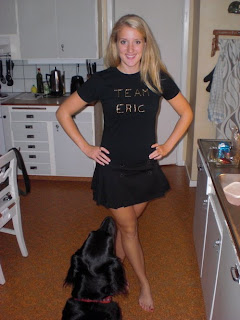 The jetlag was short-lived but I’m still getting settled this weekend. I woke up to a delicious breakfast (with a taste of America) the first morning. 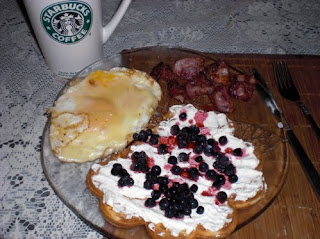 The next day I registered with the Swedish Tax Board yesterday and my Social Security Number will arrive in the mail soon. Next week’s tasks include obtaining a driver’s license and polishing my CV (curriculum vitae, basically an expansive résumé used in Europe). Amanda starts school in Jönköping on Tuesday and I may start a Swedish course that day, too.
Posted by Eric Gourley at 9:05 AM