Sunday’s national election was a historic one for Sweden, which picked a new parliament as well as “county” and “city” officials.

Voters surprisingly re-elected their Prime Minister Fredrik Reinfeldt and his center-right coalition, but did not give it another majority. Instead, the far-right, anti-immigration Sweden Democrats were elected to parliament for the first time, which scares a lot of people in this part of the country.

I’m told it was the first re-election to another term in almost a century. Swedish public TV made a bigger deal of it all evening than some American stations did President Obama’s historic night. 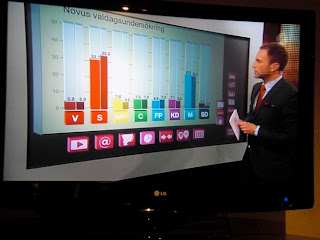 Rather than the first Tuesday after the first Monday in November chosen by Congress as the day for U.S. elections, Swedes flock to the polls every four years on the third Sunday in September.

Despite similar ways to vote early and cast ballots by mail, it still strikes me that any Tuesday would naturally see higher voter turnout than any Sunday. The truth is, I couldn’t be more wrong.

For a slew of reasons, voter turnouts in Sweden have always trumped those in the U.S.

Turnout here historically hovers around 80 percent, and Amanda’s aunt, who did some work for the Moderate party in this year’s election, said officials expected this year to surpass the 82 percent mark from the 2006 election.

Those numbers are pretty insane when you consider that only 56.8 percent of the U.S. voting-age population cast ballots in the national election two years ago and the 2006 election saw an abysmal 37.1 percent turnout.

Obviously, getting young Americans to the polls has always been a problem, whether they feel disconnected from Washington, don’t think their lone vote can make a difference or just don’t care.

Across the pond, the seed is planted early in Swedish schools. Amanda was two months too young to vote in the 2006 election but couldn’t wait to visit a precinct for the first time today as one of a record number of first-time voters in a Swedish national election. Her 16-year-old stepbrother’s freshmen class held a mock election with real candidates and parties at his high school last week to stress the importance of voting when students become eligible to register. Political discussions are much more common at the family dinner table in Sweden.

The voting process is similar to the U.S. in many ways. Voters selected ballots for various parties in the precinct’s entry room, with most people taking ballots from several parties so as not to make their choice obvious. 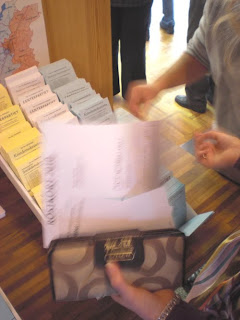 The green curtains may not be quite as private as the “voting rooms” we’re used to seeing in the States, but you get the idea. 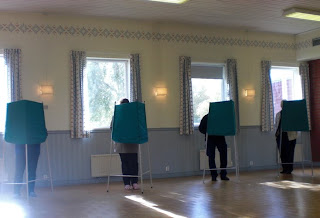 As an indefinite Swedish resident and California citizen, I’ll be voting as a “citizen overseas” in the election this fall. Sacramento County starts sending out ballots tomorrow and I just have to mail it back or fax it in by 8 p.m. on November 2.

I didn’t think another Republican had a shot at the Governor’s office after Schwarzenegger but I hear it’s still shaping up to be a coin flip. Former eBay CEO Meg Whitman sure is doing her best to buy her way into office over Democrat Jerry Brown. I also have passionate feelings about Proposition 19 and its potential detrimental impact on the local economy where I was raised, so I’ll definitely be checking the mailbox regularly next week.
Posted by Eric Gourley at 3:43 PM