I’ve been back in Sweden almost a week but it feels like I just left Scotland yesterday. It was a rushed few days in Glasgow and I’m already itching to go back and experience Edinburgh sometime in the future.

It was weird to imagine going to a country where the official language is English, yet I’d have a difficult time understanding most of what the natives said. Experiencing that was even stranger.

I mean I expected I’d hear things referred to by non-American words. Like when the attendants on the flight to Glasgow came through the cabin to collect “rubbish” before landing. Or the train from the airport to central Glasgow that reminds passengers to mind the platform gap when “alighting” from the cars. Or the elevators in the tall buildings known simply as “lifts.” Words we probably wouldn’t use everyday in the States. You get the idea.

I’d estimate 85 percent of Glasgowians smoke. And they don’t smoke cigarettes, they smoke “fags.” They drive on the “wrong” (left) side of the road and their taxis are all the famous London hackney carriages. Those were my first observations during the four-minute walk from Central Station to the hostel.

I’ve stayed in some really nice hostels across Europe and also suffered through nights in some pretty terrible ones. Euro Hostel’s flagship property in Glasgow, a nine-story building overlooking the River Clyde, definitely falls into the former category. It’s in the virtual city centre with all the shops, restaurants and countless watering holes. 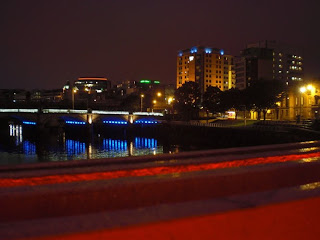 My view from the sixth floor. 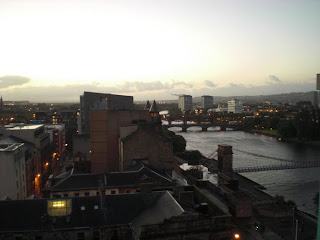 The River Clyde is tantamount to Glasgow’s history, from fishing industry to the construction of war ships. An extensive system of pedestrian suspension and vehicle bridges cross the river in dozens of places, connecting the northern half of the city with the south. 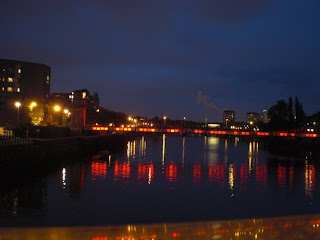 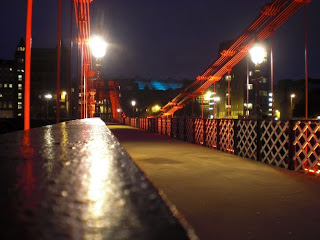 Glasgow is home to some impressive architecture, like St. Andrew’s in the Square and its honey and rose sandstone, prevalent in other old buildings throughout the city. 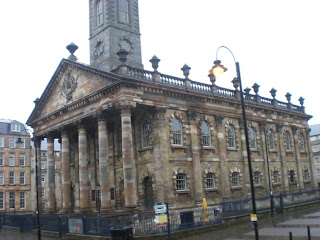 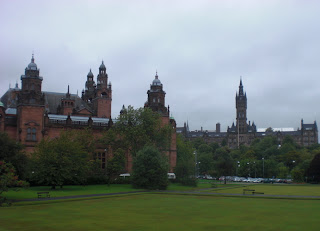 A popular student club in the university area was lively on a Tuesday night. 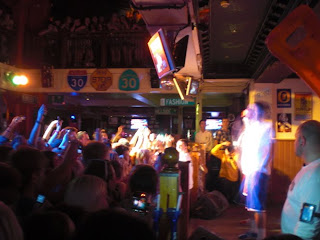 The armadillo-looking building below is the Scottish Exhibition and Conference Centre. In the foreground, the city recently began construction on a new stadium in preparation for hosting the 2014 Commonwealth Games. 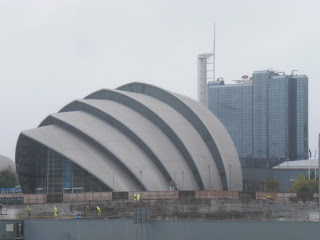 I had some good food – the traditional greasy fish n’ chips from a corner stand – and some not so good – haggis, a spicy sheep intestine sausage type dish that all foreigners are supposed to try.

Scotland produces some excellent beers, most notably at West Brewery in Glasgow Green. The brewery occupies the left side of the Templeton Building, pictured below, where a famous carpet factory sat from the late 1800s until the 1950s. The factory produced rugs for the Whitehouse’s West Wing and the Taj Mahal. 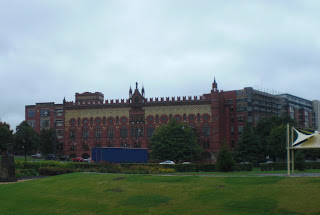 Across from the Templeton Building is the People’s Palace and Winter Gardens, a social history museum and adjoining glass conservatory of exotic plants. 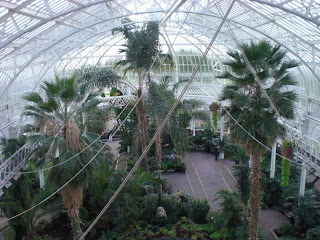 I hoped a visit to People’s Palace would help me explore deeper into some family history. My dad’s side has Scottish roots dating back many generations. Since the museum showcases how people lived in Glasgow back to around 1750, I had hoped to see the Gourley (also spelled Gurley and Gourlay back then) name in an exhibit or two.