After dealing with a serious dearth of shirts, pants and hoodies during my first two months in Sweden, I was reunited Wednesday with the rest of my threads and other important personal effects shipped by sea.

The whole process further supported my stereotype that shipping is one of the scummiest business operations on the planet. From my limited experiences, the receiving offices are usually in the sketchiest industrial parks, like the one in Göteborg, below, which Amanda also used to transport items when she first moved back home after three years in California. 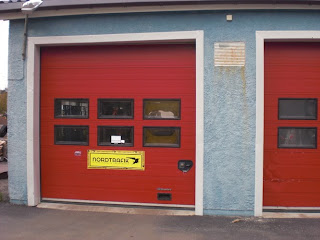 The agents operating them are usually sleazy and unhelpful. Once they have your money, they stop responding to emails. Your shipment often gets to the port many days after its scheduled arrival and the agents are still slow to go pick it up. There are multiple customs and residency forms to fill out, some of which you’re told about only after repeatedly calling to check on the status of your shipment.

Seven weeks to the day, I’m just happy to see my clothes, snowboard and snow gear and digital SLR camera again. Opening the boxes felt remarkably like Christmas, since I even forgot about a few things I packed. I could have shipped much more volume for the approximately $400 USD minimum (half to the company in Oakland where I dropped it off and half to the company in Göteborg where I picked it up) but this was really all I needed since I packed very smart and took advantage of the rate being based on volume rather than weight, unlike most other companies out there.

It doesn’t look like much all boxed up, but the shipment weighed a combined 49 kilograms (108 pounds). 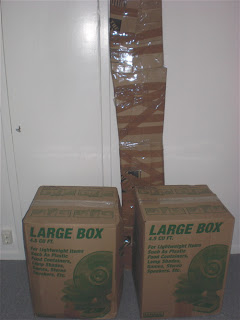 I’m singing the praises of vacuum bags, which enabled me to ship most of my wardrobe in only 4.5 cubic feet. These things hold about four times more clothing than it looks like. 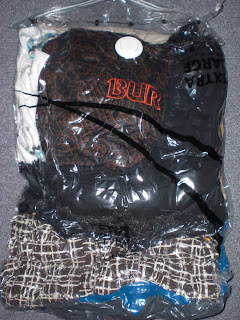 Here’s what those two boxes look like unpacked. I was even more impressed after removing the clothes from each vacuum bag. 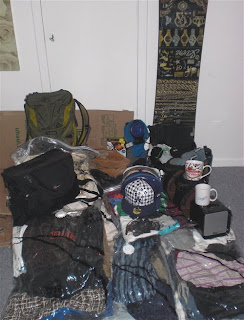 I hope to avoid dealings with any shipping companies for a long time. At least I’m ready to hit the slopes as soon as the snow starts falling and I’ll be making fewer trips to the laundry room from now on.
Posted by Eric Gourley at 4:58 PM