I hope I never need an urgent emergency response in Sweden, because the system here is frighteningly flawed. I’d literally be scared for my life if I ever need immediate medical assistance.

Last night around 11, I heard what sounded like someone trying to open our kitchen door. I went to check it out and sure enough, the handle moved a few times while I stood there. I tried to open the door but couldn’t.

We had heard a big group of people leave a party on the floor above us a short time before, and we soon ascertained that someone had passed out in our stairwell.

Amanda went out our front door, walked around the building and back in through the rear entrance to find an unresponsive woman slumped against our door. She tried to talk to the woman but she was incoherent. Amanda went upstairs to see if anyone was still at the party, but evidently everyone had gone to the bars and left this woman on our doorstep. By the time Amanda got back downstairs the woman had lost consciousness, but was still breathing.

Our other upstairs neighbor Ida came down to help and we called multiple friends of the people who threw the party to see if anybody knew who the woman was or who she had come to the party with, but to no avail. The woman’s cell phone had a pin code and she couldn’t give it to us.

I’ve heard too many horror stories about people choking on their own vomit and dying because their friends left them to pass out, and I knew this woman could be in danger, so we decided we had no choice but to call for an ambulance.

The emergency number in Sweden — and the 26 other member countries of the European Union — is 112. Children are taught to memorize it by “1 mouth, 1 nose and 2 eyes,” which has always been somewhat confusing to me because people also have two ears, and sound can be a very useful sense in detecting certain emergency situations, too, right? But I digress.

For almost 40 years, a private for-profit company called SOS Alarm has been responsible for operating 112 in Sweden. When you dial the number, you reach an operator in one of 18 regional offices. 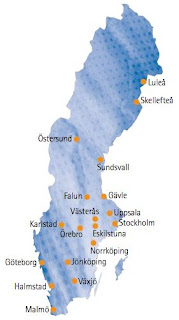 You explain your emergency situation and the operator makes a critical determination of which services — police, ambulance and/or fire — you need dispatched to your location. They then transfer you to who they feel is the most appropriate authority in your local area and you repeat your situation to them before coordinating the details of the response.

I might be missing something here, but it sure seems like one of those situations where the middleman can be cut from the equation.

In the 15 minutes between our call to 112 and the arrival of two policemen, the woman had regained some consciousness. Also during that time, one of the partygoers returned and tried to help the woman sit up. Another partygoer showed up shortly after the police and saved the woman from arrest by convincing the police that they should just let her and the first partygoer drive the woman home.

What upset me the most wasn’t that the police spent most of their short time in our building laughing as the woman tried to put words together. It wasn’t that they didn’t ask any questions or do any investigation, like trying to find out if she had combined drugs with alcohol and maybe really needed serious medical attention. It wasn’t even that they didn’t blink an eye as the second partygoer, who also appeared drunk, offered to drive the woman home in a country with a virtual zero-tolerance policy for driving while intoxicated.

It was the fact that contrary to the ambulance response that Ida, Amanda and I were recommending based on having observed the woman first-hand, the SOS Alarm operator concluded that only police should be sent. If the police had then found the woman in as serious trouble as she appeared to be when we called, I suppose it would have probably taken another 15 minutes for an ambulance.

The company’s money-saving measure worked out last night, but it often doesn’t. SOS Alarm and the 112 system have come under serious fire recently, and with good reason.

SOS Alarm’s defense is pathetic. The company usually claims these unfortunate situations occur during times of high demand for emergency services, but I think it has much more to do with money. In this article from just a week ago, the troubled company’s owners are demanding profit hikes.

I can practically count on both hands the number of times I’ve heard emergency sirens since I moved here last August. Service demand can’t be that high, and it’s so sad that lives have been lost because SOS is too profit-oriented to operate under a “better safe than sorry” mentality. If any company should take such precautions, they’re it.

Four Swedish counties already plan to ditch SOS Alarm in favor of another company this fall and others should follow suit. SOS has a track record of incompetence and that’s just unacceptable when human lives are at stake.
Posted by Eric Gourley at 9:39 AM No comments: