It’s a lengthy explanation, but let me give it a shot.

For more than 50 winters, Sweden has held an annual music competition called Melodifestivalen — you guessed it, “The Melody Festival” — to select the Swedish representative for the Eurovision Song Contest in May.

I had never heard of Eurovision before moving across the pond, which some might call embarrassing considering how musically connected I consider myself.

In any event, the European Broadcasting Union settled on an international song contest when exploring ways to bring its member countries together in the years following World War II.

Participating countries perform their song on live TV and then use a positional vote system to award 1, 2, 3, 4, 5, 6, 7, 8, 10 and 12 points to other countries’ songs, with a country’s favorite song being given 12 points. Determining the overall winner is quite a process, and global audience numbers have topped 600 million. Eurovision is credited with launching the international careers of ABBA, which won for Sweden in 1974 with “Waterloo,” and Celine Dion, who won for Switzerland in 1988.

Sweden makes a huge deal out of its eight-week Melodifestivalen. It’s far and away the most popular Swedish TV program. Of the 9.1 million people living in the country in 2007, 4 million watched the final.

Public phone votes and panels of jurors have equal weight in selecting the Swedish winner, but from what I’m told, it’s taken a very radio-friendly pop song no matter what to win the contest in recent years. That sure was true this year, as you’ll hear below. Loreen beat Danny in a two-horse race for the honor of representing Sweden in Azerbaijan a few weeks from now.

One band that appeared to win a lot of new fans throughout the competition before falling short in the semifinals is Dead By April. Wikipedia describes them as “Pop-Metal.” Their Spotify bio says “metalcore.” iTunes simply classifies them as “rock.”

I’m not quite sure how to describe Dead By April. They’re like a fusion of a boy band and a hardcore punk band. Think, maybe, Backstreet Boys meet The Used or 30 Seconds to Mars.

I’ve never really been a fan of any genre of guitar music, other than maybe country. My musical tastes are almost exclusively rap and R&B, and with a growing amount of trance. Never any type of rock whatsoever.

But I think Dead By April have kind of a nice sound. The interspersed screaming probably threw a lot of people off during Melodifestivalen and undoubtedly didn’t earn the band any of Sweden’s pensioner votes. I can’t really take it seriously, either. I find myself laughing every time Jimmie does his thing. But it seems so difficult to do I’m also sort of fascinated, so I have to see it live.

Tomorrow is Valborg, a big spring kickoff festival in Sweden and other countries in Northern Europe. The bar up on Mösseberg here in Falköping somehow landed Dead By April for the evening, which is an accomplishment considering the small size of our town and the fact that the band is a pretty big name in Sweden. As you’d expect, the town is abuzz.

It promises to be a very different concert experience for me and I’m looking forward to it. 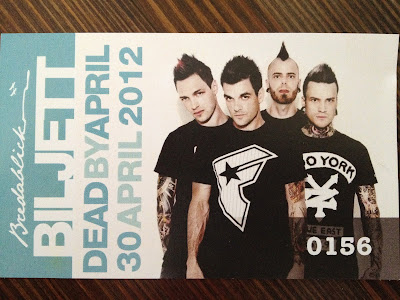 Posted by Eric Gourley at 7:53 AM No comments: