I relocated to Sweden three years ago today. I could now apply for citizenship.

To become a Swedish citizen, most must have been living here for a consecutive period of at least five years. That period is reduced to three years, however, for those of us who are cohabiting with a Swede. 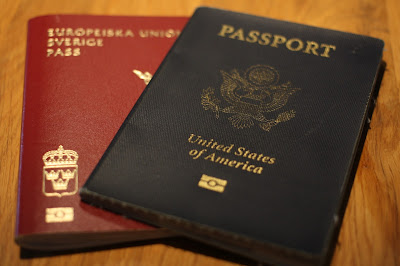 That said, while I am now theoretically allowed to carry dual citizenship, the U.S. really frowns upon it, particularly in this situation. Many Americans who voluntarily apply for Swedish citizenship have lost their American citizenship — and they didn’t even consider that possibility when applying.

Furthermore, the vast majority of generous benefits enjoyed by Swedish citizens — including healthcare and childcare that are heavily subsidized by the government and a guaranteed pension — are also afforded to those of us who hold permanent residence permits. I’m not chomping at the bit to vote in Swedish national elections, so that doesn’t leave much motivation at all for pursuing dual citizenship, considering the circumstances — as appealing as the idea may sound. If Swedish citizenship is someday offered to me unsolicited, that may be a different story. Swedish citizenship, unlike American citizenship, can’t be revoked.

The Swedish government probably assumes that someone who has cohabited with a Swede in Sweden for three years has fully assimilated and deserves the privilege of citizenship.

I’m not so sure I would even deserve it, though. My integration has been stalled for months by my own resistance to speaking Swedish. I’ve been here long enough to develop a respectable understanding of the language, and there are people both in my personal and professional circles who speak Swedish to me and I answer in English. It seems to work well.

For the vast majority of immigrants in Sweden, securing gainful employment is completely dependent on first mastering the language. I’ve been fortunate enough to grow myself professionally here in a way I sometimes doubt I would have even been able to if I had never left the States, relying on my skills, experience and education. While it hinders others, I truly believe that stubbornly sticking to English in Sweden has actually helped advance my career.

I could likely live the rest of my life here without ever speaking Swedish, but people would always view me as a “foreigner” speaking English. Fluency in Swedish is crucial to social integration, and that’s the real disadvantage about not speaking it.

As I reflect on these three years in Sweden, not making more of an effort from day one to speak the language is probably my only regret — and a shortcoming I understand I can choose to improve at any time.

Each of my three years in Sweden has been better than the last. This year, I was granted permanent residency, put a ridiculously long train commute in my past, moved to one of Europe’s most beautiful capital cities and secured a second-hand contract for an ideal apartment in one of the world’s most notoriously frustrating rental markets. I’m also two weeks away from starting my new career with one of Sweden’s oldest and proudest engineering companies.

I’m still happy that I chose to relocate to Sweden. Quality of life is very high here. I’ve really learned to appreciate a different pace of life, the breathtaking nature and the warm people as I’ve spent more time in the country this year. After seven trips back to the States in my first 26 months, I’ve visited only twice in the past 10.

As the summer starts to wind down and we prepare for a fall that always seems to be too short, I do wonder how I’ll handle another cold, dark and depressing winter ahead. I used to live for the snowy months — I even had the vanity license plate on my Subaru to prove it. (God, I miss that plate.) Maybe it’s that I’ve been snowboarding a whopping three times in three winters here — after tallying as many as a few dozen days a season in Tahoe several years ago? I’m not sure.

I do know that the benefits of living in Sweden still far outweigh the negatives, and until that changes, I’ll continue to enjoy life here as an expat.
Posted by Eric Gourley at 7:48 AM No comments: