We were walking down a remote side street in Göteborg this afternoon, near the Avenyn, when we came across a small cluster of cops standing in the road.

Here’s an unsuspecting motorist turning down the street. 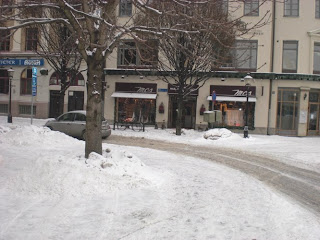 We watched for a while and it became clear they were waiting to stop the few cars that happened to travel down that isolated street.

It was a typical Swedish sobriety checkpoint. I’d heard about them many times but hadn’t encountered one in my first four months here. 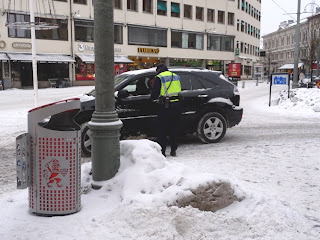 Such DUI stops are astonishingly common here. So common that Swedish police executed more than 2.5 MILLION breath tests in 2009.

I just can’t wrap my head around that number, for a few reasons. Since I’m killing time in the hotel while we wait to hear if my parents’ flight is going to get off the ground from Brussels tonight, I decided to reference some tables and charts on the Statistics Sweden website to help me explain how mind-boggling that figure is.

Then you’ve got to remember than the driving age is 18 and there are about 2 million kids too young to be on the roads. Very few people over age 80 are driving around either, so let’s also subtract that half-a-million.

The number is even more astounding when you consider that an estimated 85 percent of the population lives in urban areas, and the other 1.5 to 2 million people live in the large cities like Stockholm and Göteborg. Very few of those people even own cars due to the efficient public transportation systems.

If you accept those calculations, that probably means 1 in every 2 drivers were stopped and breathalyzed in 2009. Obviously some didn’t encounter a single checkpoint and others were tested multiple times last year but on average, that’s 1 in 2.

So how is that possible? How can Swedish police legally issue breath tests to that many people?

Swedes scoff at the constitutional protections California’s drivers are afforded. In the Golden State, landmark Supreme Court cases have created major burdens for police to conduct legal DUI checkpoints. These requirements include:
Those are some high hurdles for California’s cops. Swedish law enforcement officers face none of those restrictions.

The thing that struck me most about the checkpoint in Göteborg today wasn’t that it was unadvertised, unmarked or that it was located on a side street with little traffic. It wasn’t even that every driver was tested. It was that police were conducting it at 2 p.m. On a Sunday. Not a Friday or Saturday night or a holiday weekend. 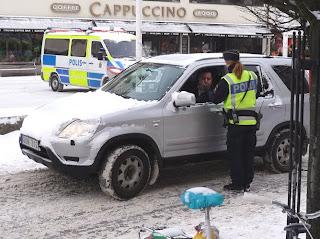 I asked my girlfriend why and was shocked to hear the police were likely targeting drivers who may have imbibed too much last night. They may have made the right decision not to get behind the wheel last night, but if they still had even minor traces of alcohol in their system some 12 hours later, the police were there to arrest them.

Sweden lowered the blood-alcohol limit from .05 to .02 in 1990 — four times lower than California and most other states. I read on a lawyer’s blog recently that his local police department approximates that a 180-pound man can drink six beers or five mixed drinks in two hours before reaching the .08 threshold.

Pretty incredible, then, to think that a BAL of .10 or higher in Sweden is deemed “aggravated drunk driving” and first-time offenders are usually sentenced to two years in prison. That’s only a drink or two more than what a driver can legally consume in California. No wonder the Golden State has more than twice as many alcohol-involved fatalities as Sweden.

Observing the checkpoint this afternoon really got me thinking. We’re so concerned with the government violating our constitutional rights in California, but is guaranteeing these extreme protections coming at the cost of avoidable DUI deaths?

I don’t completely agree with Sweden’s drunk driving prevention measures, but there’s got to be a middle ground between this and the way things are enforced in California that can still save lives, right?
Posted by Eric Gourley at 9:36 AM