Since the beginning of the month I had been noticing an inordinate number of area stores advertising waffle irons at reduced prices. I didn’t figure it out until I glanced through the grocery circulars earlier this week.

Tomorrow is International Waffle Day, a holiday that actually originated here in Sweden. The stores around Falköping wouldn’t let anyone forget it, either: 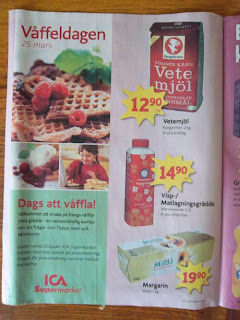 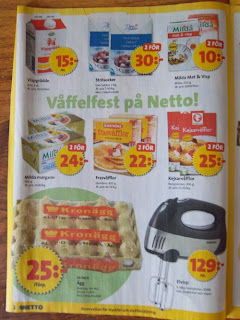 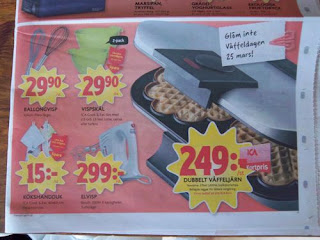 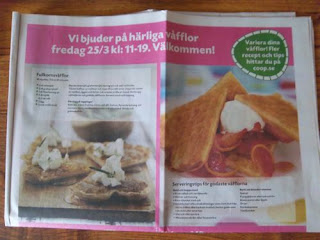 “Våffeldagen” is not to be confused with National Waffle Day in the United States in August, which honors the first patented waffle iron in 1869. One of those “holidays” I had no idea existed before writing this.

Exactly nine months before Christmas, Våffeldagen corresponds with the religious celebration of the Annunciation of the Virgin Mary (“Our Lady’s Day,” or “Vårfrudagen” in Swedish). The Annunciation celebrates Gabriel informing Mary that she was pregnant with Jesus Christ.

March 25 isn’t so much a religious holiday today as it is the day Swedes welcome spring, though it’s a few days behind the first day of the season on the calendar. (Side note: it may not feel like spring yet at least as far as temperatures are concerned, but our days below freezing seem to finally be gone. One thing’s for sure: the days are getting longer, and it’s nice having light in the sky until almost 7 p.m. again).

I’ve read two common explanations of the incorporation of waffles, which in Sweden aren’t so much a breakfast food as they are a dessert treat smothered with whipped cream and jam.

Neither explanation is particular convincing. Some people claim Vårfrudagen was pronounced like “Vafferdagen” in certain dialects. Others say that Swedish women have historically swapped their winter chores for spring tasks on March 25, and one of those is making waffles.

Either way, interesting custom. Count me in.
Posted by Eric Gourley at 6:05 PM