It would be downright impossible to commute almost 700 kilometers (435 miles) each way without high-speed trains.

SJ, Sweden’s national rail company, has operated the electric X 2000 since 1990. It may have been pretty fast when it was introduced, but it’s practically archaic by today’s high-speed standards (though it still blows Amtrak out of the water).

X 2000 trains are grey and kind of resemble the Silver Bullet train in Coors Light commercials. Powered by a 4,400 horsepower electric locomotive that draws current from an overhead line, they travel up to 200 kilometers (125 miles) per hour over the same rail as slower passenger trains and the slowest freight trains, though they typically average only 150 kilometers (90 miles) per hour.

Here's a quick video I shot:

What enables the high-speed trains to travel more than 25 percent faster than conventional trains is that they tilt. Each axle is spring-bonded to a soft bogie, which allows each car’s axle to individually follow bends in the track. To reduce sideways force on passengers, each coach also uses a hydraulic system to lean into curves. The tilting means faster speeds through turns and less force exerted on the track, which reduces wear and keeps maintenance costs down.

The major routes, which operate in a triangle between Sweden’s three big cities, are relatively straight and flat, which has allowed X 2000 to remain competitive with airlines.

I find travel by X 2000 to be pleasant and comfortable. The trains are Wi-Fi equipped and have power supply sockets at each reclining seat. A bistro in the middle of each train serves small meals, snacks and overpriced drinks. 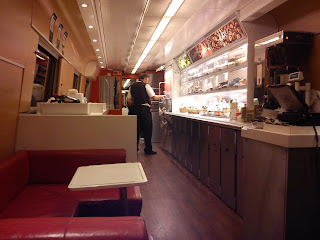 As I mentioned, the X 2000 is one of the slowest high-speed trains in the world. It barely classifies under the EU’s 200 km/h definition. I’ve traveled on much faster trains in Spain and France, which, like Japan, China or Italy, have networks with commercial max speeds of around 300 km/h (185 mph).

When the Swedish government decided a couple decades ago that investing in designated high-speed infrastructure would be too expensive, they came to the conclusion that tilting trains and improving the existing track would be the next-best thing. The cost turned out to be only $500,000 per kilometer, versus $9 million per kilometer for constructing Spain’s AVE high-speed network, for instance. While slower than other countries’ high-speed systems, Sweden’s has proven to be a far better value than building from scratch. 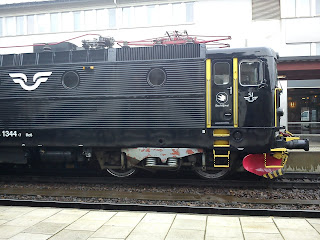 As a valued SJ customer, I received an email this week hyping the SJ 3000.

It will begin operation in early 2012 and is designed for medium distances.

Unlike the X 2000, the SJ 3000 does not lean into curves. It apparently compensates for the reduced speed there by accelerating and braking more quickly, so the travel time is about the same.

One of the only new features announced is SJ Onboard, which allows riders to view traffic information and entertainment — but they have to do it through their own laptops. I’m not sure what kind of a benefit that really is.

There’s supposed to be more legroom and the Bistro is more modern. From a centrally located wheelchair lift to accessible restrooms and toilets, the SJ 3000 sounds to be more disabled-friendly.

The new trains are also even more environmentally-friendly. The trains are made of recyclable materials and feed 12 percent of the energy they use back to the grid. Each coach will have recycling bins and energy-saving LED lighting.

Here's a video SJ recently posted on YouTube of the 3000:

I guess I’ll find out soon enough if they’re anything to blog home about.
Posted by Eric Gourley at 8:19 AM