There are so many things I love about living in Sweden. I probably haven’t made that clear enough over the last 18 months.

But no matter how many things you love about any place you call home for any period of time, there will inevitably be something you can’t stand.

One of the only things I’m still having a really tough time adjusting to even after a year and a half in this wonderful country is the unaccommodating business hours.

And I’m not just talking about Systembolaget, the government-run alcohol monopoly with some of the worst hours you could imagine. If you’re unfamiliar, catch up here.

No, it extends far past Systembolaget to virtually every type of business.

Below are major examples (and pictures, because you probably won’t even believe the words you read).

For comparison, I’ll also refer to some businesses in my hometown of Arcata, which had a population of 17,231 at the 2010 census. In the same year, my current town in Sweden had 16,350 inhabitants. For all intents and purposes, Arcata and Falköping are the same size.

Falköping has six grocery stories — four Swedish (two ICAs, a Coop, and a Willy’s), a Danish discount (Netto) and a German discount (Lidl). 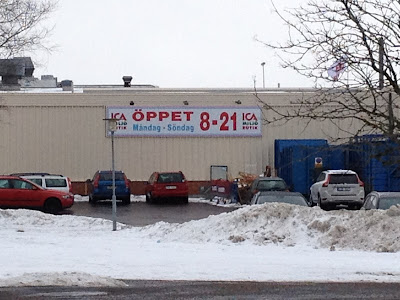 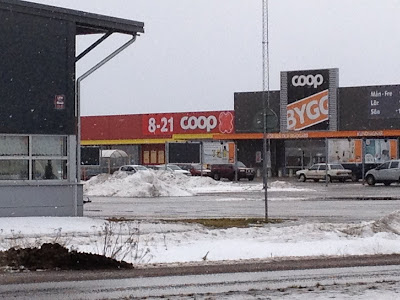 Willy’s, where Amanda and I do most of our shopping, has the same schedule except on Sunday, when it opens two hours later. 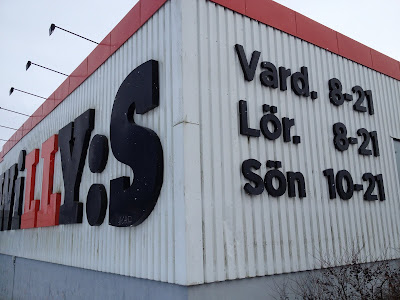 No grocery store is open before 8 a.m. or after 9 p.m. I find that ridiculous, but that’s because I’m accustomed to much more flexible hours.

Statoil, an overpriced gas station with a “convenience” store that defies the term, is the only place in town you can get any small selection of groceries before 8 a.m. or after 9 p.m. 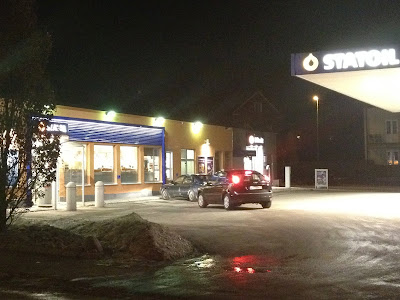 If you want any type of food at all after midnight, it’s the McDonald’s drive-thru until 1 a.m. 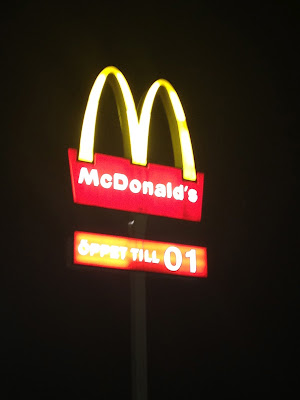 After that, your only option is pizza. We’ve got a couple dozen pizzerias in town, and to my knowledge three of them (Valentino, Happy Time and Eldorado) are open until 3 a.m. Friday and Saturday nights for partiers. That’s late for Sweden. 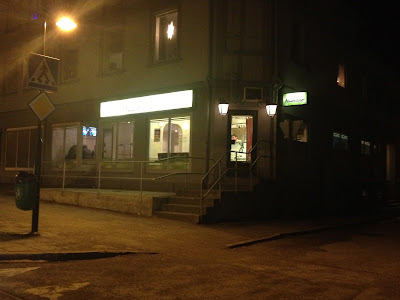 So, why am I complaining about this?

Because the town I grew up in, which is just as small as Falköping, is also home to six supermarkets (counting Safeway, Wildberries, Murphy’s Sunny Brae and Westwood, North Coast Co-Op and Ray’s Food Place, excluding mini-mart types like Greenview Market, Hutchins Grocery and Fourth Street Market on Samoa).

Safeway and Wildberries are probably two largest/most popular of those. Safeway is open 24 hours a day, seven days a week, and Wildberries is open 6 a.m. to midnight daily (same hours as our town’s “most-convenient” store). Even the Co-Op is open from 6 a.m. to 9 p.m. every day, and it has the worst hours of any supermarket in Arcata.

With a 24-hour supermarket, you never have to worry about buying groceries around the store’s schedule.

If you want other food in Arcata at strange hours, there’s Don’s Donuts and Toni’s Restaurant, which are also both open 24 hours. Arcata Pizza and Deli, which offers a lot more than just pizza, also serves the late-night crowd until 11 p.m. Sundays, 1 a.m. Monday through Thursday and 3 a.m. Friday and Saturday.

That’s what I’m used to, which makes the restrictive hours here in Sweden feel even more limited.

What Systembolaget is to alcohol, Apoteket is to medicine. Well, the government-owned pharmaceutical monopoly was actually abolished a few years ago — maybe the Swedish government didn’t like being put in the same category as Cuba or North Korea — but in small towns like Falköping, it’s still the only option for medicine.

Apoteket is open from 9 a.m. to 6 p.m. weekdays and 9:30 a.m. to 2 p.m. on Saturday. If you need prescription medication at 2:01 p.m. on Saturday afternoon, you have to wait 43 hours until the pharmacy opens again Monday morning. 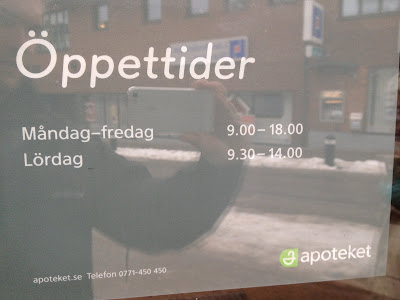 That’s crazy, but maybe I say that in part because 24-hour pharmacies are becoming the norm in the United States, now mater how small a town is.

Sadly, Ö o B has some of the best hours of any store in town. It’s kind of like a small-scale Walmart — lots of random stuff at cheap (relative to this being Europe) prices. It’s open until 7 on weeknights and 5 on weekends. 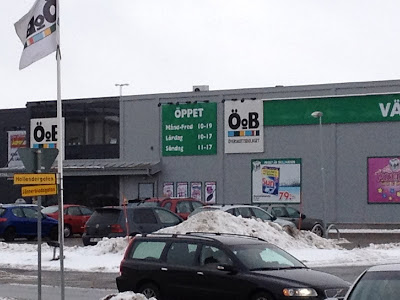 Bokia operates several dozen bookstores across Sweden and is one of the largest book chains in the country. It doesn’t seem to be suffering the same fate as U.S. chains that Amazon has essentially put out of business.

Not that I buy a lot of my books at bookstores — I prefer Amazon UK’s selection and prices, even after international shipping — but if I did want to, I would have to do it between 10 a.m. and 6 p.m. on weekdays or 10 a.m. and 2 p.m. on Saturday. 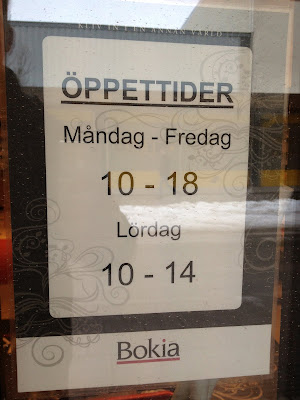 It’s closed on Sundays, of course. What kind of a bookstore is that? I’ve never been a huge recreational reader but I’ve always imagined Sunday is probably the biggest recreational reading day of the week, no?

Buying a Cup of Coffee

Lila blå is our favorite coffee shop in town. They offer the best caffeinated drinks around, hands down. But if I’m not home and want to grab a cup at 6 or 7 in the morning, I’m out of luck. They never open before 8, close at 3 p.m. on Saturdays and are closed on Sundays. 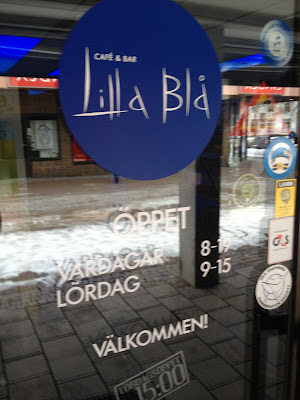 I bank at Nordea and I often wonder why, because there are a couple of banks with slightly better hours.

If I need to go exchange currency or do an international transfer, which are pretty much the only things I can’t do online, I have to do it before 1 p.m. 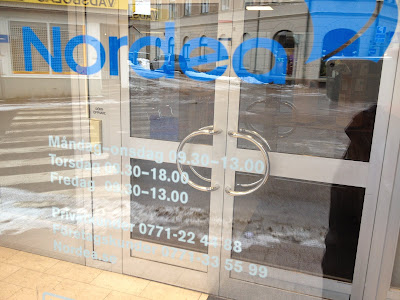 Yes, my bank closes at 1 p.m. all but one day a week (it’s open until 6 on Thursday, likely dictated by Systembolaget’s extended hours that day of the week).

These limited hours aren’t unique to small Swedish towns. It’s not much better in the few big cities.

If any of this has surprised you, you’re probably wondering why it is this way.

As far as I can tell, there’s absolutely no demand for it to change. This is how it’s been for a long time and this is what Swedes are used to. Consumer preferences will never prompt an extension of opening hours. It’s obviously only expatriates like myself who have a problem with it.

There’s another reason, though, which has to do with how well Sweden treats its employees. There are countless perks for workers, such as at least five weeks of paid vacation every year.

The benefit here that I believe discourages any business from considering an extension of its hours is “OB,” which basically means inconvenient/uncomfortable working hours.

If somebody works during these hours, they automatically earn an hourly supplement to their fixed monthly salary. It varies a bit from employer to employer and I could be wrong with these details but it’s my understanding that many employers offer both a regular supplement for “simple” inconvenient hours and a double supplement for hours that are “particularly inconvenient.”

I understand that some industries in the U.S. offer similar differentials and that there are jobs where employees earn double-time or night shift differentials, but it’s not nearly as standard as it is here. My last newspaper could never have paid me a differential like that. My typical shift was 3 p.m. to almost midnight, often on weekends, too. That extra money would have added up fast.

If a Swedish grocery store tried to remain open 24 hours a day, it would go out of business paying its employees for all the “inconvenient hours” they would work.

Sweden’s restrictive business hours will never improve. There’s no demand for it and even if there were, a massive overhaul of labor laws would be necessary to make it economically feasible for businesses.
Posted by Eric Gourley at 7:45 AM