Since its launch in 2005, Fokus has ranked the country’s 290 municipalities each year to determine the overall best place to live based on more than 40 factors that fall into five overall best categories: to be young, to be old, to have a family, to work, and for fundamentals such as housing values, crime and suicide rates, health statistics and protected environmental areas.

Falköping ranked 68th overall in the new rankings Fokus released today to crack the top 25 percent, up 62 spots from its 2011 mark. 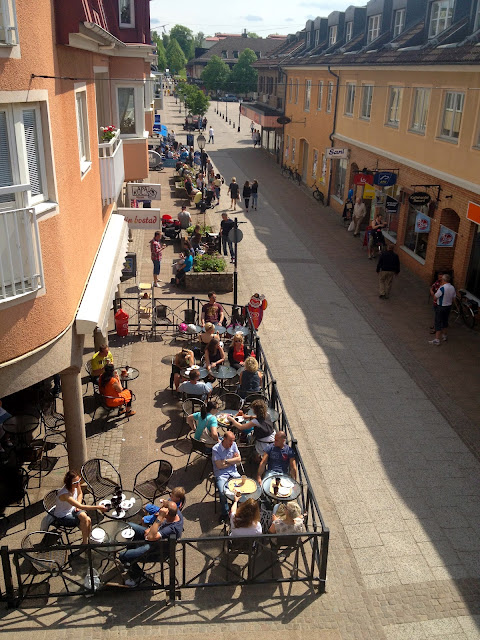 Our town scored in the top quarter in buying a house (17), divorce rate (50), unemployment development (50) and environmentally protected areas (72), and top fifth in two of the “best to be old” categories.

We ranked in the lowest quarter, though, in business climate (232, the justification for my commute), achieved goals in school (243) and beach length (280, we don’t have any beaches).

Habo, a tiny town of 7,000 near Sweden’s second largest lake about 30 minutes south of us, earned the top overall ranking.

Many of the other results were pretty predictable. Many of the rich Stockholm suburbs are ranked in the top 20, while the capital itself is 54 this year. Sweden’s two big university towns, Lund in the south and Uppsala north of Stockholm, ranked 3 and 29, respectively.

At 68, Falköping ranked behind Amanda’s university town, Jönköping (27), as well as nearby Skövde (33), but ahead of Sweden’s nicest ski village, Åre (72), the closest town to the summer house, Falkenberg (134), and significantly ahead of Sweden’s second and third cities, Göteborg (207) and Malmö (284), the latter of which slipped 97 spots since last year’s rankings and has earned a negative reputation for its recent crime.

Fokus compiled the rankings using numbers from administrative agency Statistics Sweden and the National Public Health Institute, so they’re more objective than one might think. Still, you can’t take these things too seriously — especially if your municipality isn’t highly ranked, I guess.

I’ve been to many cities and towns in central and southern Sweden, and while Falköping may leave me feeling a bit under stimulated at times, overall I believe it’s very deserving of its 2012 ranking and significant improvement from a year ago.
Posted by Eric Gourley at 2:39 PM