A Televised Taste of Humboldt

It still surprises me how many Swedish television channels show subtitled American programs.

When they’re on we might watch CSI, Scrubs and my personal favorite, Two and a Half Men, but tonight TV6 was showing an old episode of Speeders on which a Eureka Police officer stops a Ferndale woman for flooring it on Harris St. 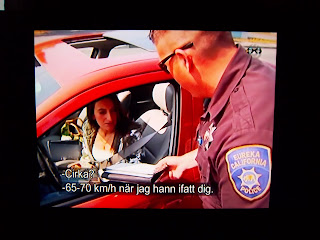 According to this Times-Standard story, truTV’s cameras followed officer Greg Hill for a few days in 2008. In addition to some outrageous traffic stops, the cameras also caught a heroin bust that didn’t make the episode, according to this article.

Boy, would that have shocked viewers in Sweden.
Posted by Eric Gourley at 12:22 PM