It is inexplicable that I’ve lived here for almost 16 months without blogging about Swedish pizza.

It’s been a staple of our diet since the day I moved to Sweden. I’ve estimated I probably eat six pizzas per month, on average.

Swedish pizza — which isn’t actually Swedish at all, but I’ll get to that in a minute — is healthier than their American counterparts. The crust is thinner, and the cheese and toppings aren’t always loaded on as heavily.

Pizza is also arguably the best bang for your kronor when it comes to eating out in Sweden. You might not have guessed it, but McDonald’s, Burger King and the like are insanely expensive over here. A pizza can run anywhere from $9 USD to $13 USD, making it one of the cheapest dinner options around. Swedish pizza is never sold by the slice, and in most scenarios the only size — around 12 inches across, but remember, it’s also thin — is the perfect amount to be a “personal pizza.”

Italian immigrants who came to Sweden to work in the late 1960s and early 1970s brought pizza here with them. Today, virtually every Swedish pizzeria is owned and operated by immigrants from one of the many countries that border the Mediterranean Sea. We’ve discovered only one, near Amanda’s family’s summer house, that is run by Swedes.

The most popular Swedish pizza (by a longshot) is kebab pizza. In the Middle East, where kebab originates, it’s supposed to be lamb meat. Here, it’s some nasty blend of lamb (if you’re lucky) with beef, chicken, pork, turkey and even goat, fish or other seafood, roasted on a vertical spit. It really is just shaved “meat.” I wouldn’t touch it with a three-meter pole, but most Swedes love it.

Kebab pizzas are smothered in both a yogurty sauce and a hotter sauce. Most Swedish pizzas are topped with some type of sauce, typically Bernaise.

The first Swedish pizza I ate during my original visit was a Quattro Stagioni (“four seasons”) with ham, mushrooms, mussels and shrimp each covering one quarter of the pizza. It was probably my go-to choice for my first six months here.

My favorite pizza these days is the Africana, which usually includes chicken, bananas, peanuts, curry powder and sometimes even shrimp, often with a pineapple ring in the center. 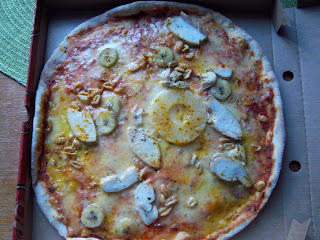 There’s even a place in town that serves it with a liquid form of curry. Remember what I said about sauces? 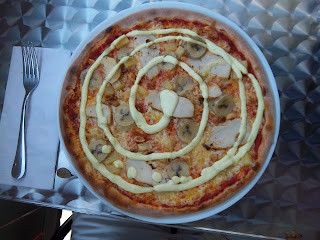 Bananas aren’t even the “weirdest” topping to someone accustomed to American pizza. At the lone “Swedish pizzeria” we know this summer, Amanda’s friend Nathalie ordered a pizza with meat sauce and asparagus. 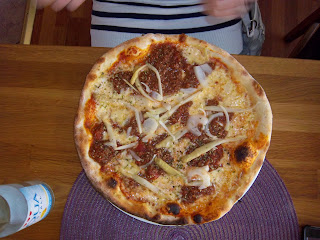 Amanda’s Napoli pizza of sundried tomatoes and mushrooms was also loaded with broccoli and spring mix. 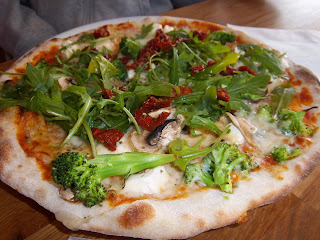 No matter if you’re sitting down or taking it home, every pizza in Sweden is served with an included order of “pizza salad,” a sour but tasty combination of shredded raw cabbage, oil, vinegar and spices. 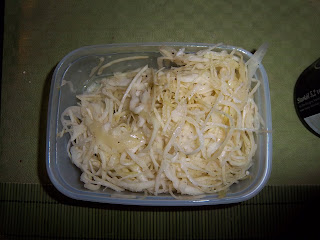 Some people eat it before and some enjoy it as a side dish. Others put it on their pizza. I didn’t like it in the beginning, but it quickly grew on me.

Many people ask me whether I prefer Swedish or American pizza, expecting to hear the latter. But there really are a lot of things I like about Swedish pizza.

There’s a joke that every town and city in Sweden, regardless of total population, has one pizzeria for every 1,000 residents. In our city of roughly 15,000, that’s probably spot-on. I’ll have to count someday.

Anyway, my point is that there’s something almost endearing about how imperfect each pizza is. Even the spelling of the pizzeria can have flaws. 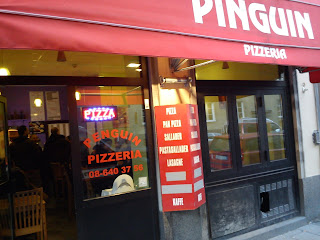 Every Swedish pizzeria is unique — Pizza Hut is the only chain with any level of Nordic penetration — and you never know quite what you’re going to get. 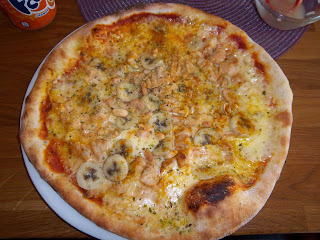 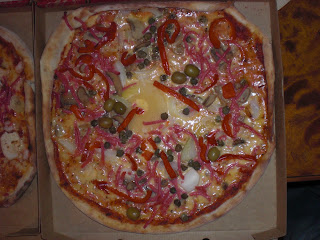 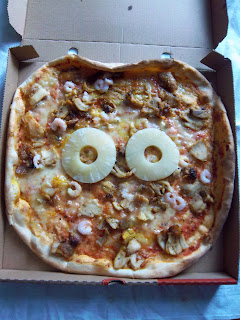 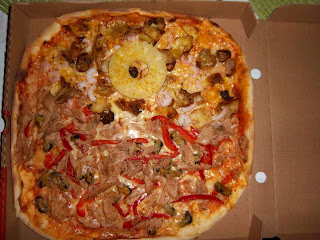 But you can almost always bet it will be delicious.
Posted by Eric Gourley at 12:24 PM